Joe McKeehen Takes Away $7.7 Million And The Coveted Gold Bracelet! 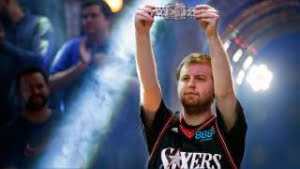 Joe McKeehen, the 24yr old poker player who went into the final leg of the WSOP with a commanding lead in chips, has taken the 2015 WSOP championship. He has, therefore, taken home a whopping $7,683,346 in cash and the gold bracelet that every poker competitor yearns to have. He came into the last leg with 128,825,000 chips while his fellow competitors, Neil Blumenfield and Joshua Beckley, came with 40,125,000 and 23,700,000 respectively. The new WSOP champion hails from North Wales, Pennysylvania.

While this young poker player may wish to take a break and relax after the challenging WSOP series, his love for the betting game may not keep him away from the poker tables for long. And even if he decides not to grace casinos for a couple of weeks, there is always online poker that is just as thrilling and which he can access from the comfort of his home.

How McKeehen Led From Start

From Day 1 of the November Nine, McKeehen had great advantage over everyone else as no other player was close to him in the chips count. His stack was almost a whole third of the total chips held by all the nine finalists. In poker, you have an edge when you have a bigger pile of poker chips as you can afford to lose a sizeable number to competitors and still make a comeback. So McKeehen began to fight for fame and riches in Las Vegas this week with a stack of 63,100,000 chips.

And he has made it to the top and indelibly written his name, not just within the precincts of Rio’s Penn & Teller Theater and Las Vegas, the unofficial home of poker, but in the history books of world poker. His name will always come up as the champion of the 46th Annual World Series of Poker.

His rival in the very last leg of the poker tournament, Joshua Beckley, had come to November Nine with just 11,800,000 chips and he managed to clinch second position and qualifying for the 2nd position cash prize of $4,470,896. This goes to show the unpredictability of poker.

There were others who fell on the wayside and had come into November Nine with higher piles of chips, including Zvi Stern who brought with him 29.8 million chips; Pierre Neuville who came with 21 million, Max Steinberg who had 20.2 million, 23yr old Thomas Cannuli who came in with 12.3 million and third position holder, Neil Blumenfield, who had entered with 22 million chips.

2015 has seen two elderly poker players reach the last leg. There was Neil Blumenfield, the 61yr old who hails from San Francisco and who ended up in a respectable third position. Then there was Pierre Neuville, the 71yr old poker player of Belgian descent. This resilient septuagenarian was the last to be eliminated in the first day of the finals and he secured himself a respectable 7th position. The competitors who entered the WSOP tournament were over six thousand.

Blumenfield has taken away the 3rd position cash prize of $3,398,298 while Neuville took away the 7th position cash prize of $1,203,293. That is impressive, especially considering the massive number of entrants there were. This year’s prize pool for the poker series was $60,355,857 and the Buy-in was $10,000. The poker tournament cash prizes graduated upwards is ranges from $15,000 for the players ranking 649th to 1,000th position.