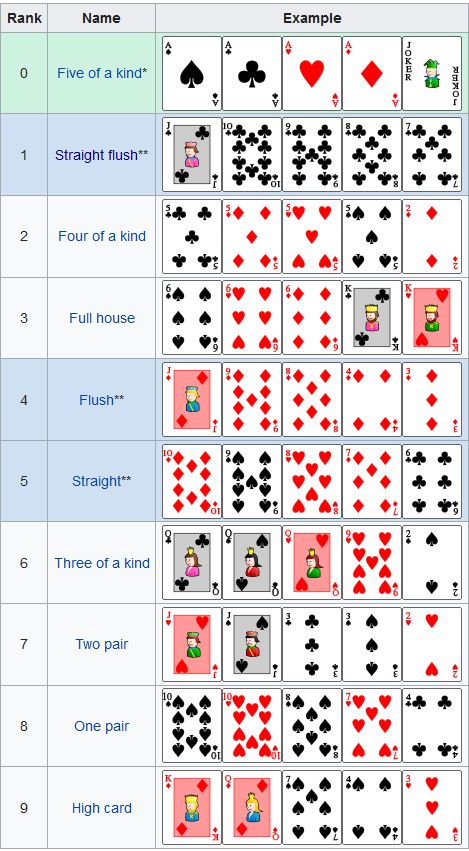 If you have been considering a dive into the world of poker, you must have come across the term poker hand. This basically refers to a configuration made up of five cards which could all be held entirely by the player or partially drawn from the shared community cards. This 5-pack if aligned properly is your winning ticket in the game. Position on the other hand refers to the sitting arrangements on the table and their impact on the game. It’s general knowledge that a player in a late position has an edge over other players because you can be able to study all their moves and use the information to your advantage.

A royal flush consists of the following cards all of the same suit: ten, jack, queen, king and Ace. So you could have an alignment of these cards as all hearts, spades, flowers or diamonds.

A straight flush is where you line up five cards of the same suit in sequence such as having a 3,4,5,6,7 set made up of spades.

A four of a kind pack is where you line up four cards of the same denomination with every suit represented and a fifth random card. For instance you could have 10 flowers, 10 spades, 10 diamonds, 10 hearts and 4 diamonds in your set.

Having a full house entails pairing up two cards of the same denomination with three cards of another denomination. For example you could have two Kings and three aces in your pack.

A basic flush is where you have any random five cards of the same suit. You could for instance line up 2,6,Q,4,K all made up of hearts.

A straight hand is where you have five cards in sequence from any random suit. For example you could have 3 hearts, 4 spades, 5 flowers, 6 diamonds and 7 spades.

When you talk of a three of a kind setting, here you need to line up three cards of the same denomination and other two unmatched cards. You could for instance have 9,9,9,A,K.

A two pairs setting is where you have two sets of two cards of the same denomination and a fifth random card. A sample set would be like 9,9,K,K,10.

The one pair pack entails having two cards of the same denomination and three unmatched cards. You could for instance have a 3,3,K,9,A set.

The last poker hand is a no pair set where you have five cards of different ranks and various suits. You could for example have 3 flowers, A spades, 8 hearts, K diamonds and 10 spades in your set.

As covered in this article, there are ten different poker hands that you could attempt to make a killing in the game of poker. Sitting in a late position can prove beneficial because earlier players can cast the cards you need to complete your hand on the table. Keep a hawk eye and try as many poker hands as you can.